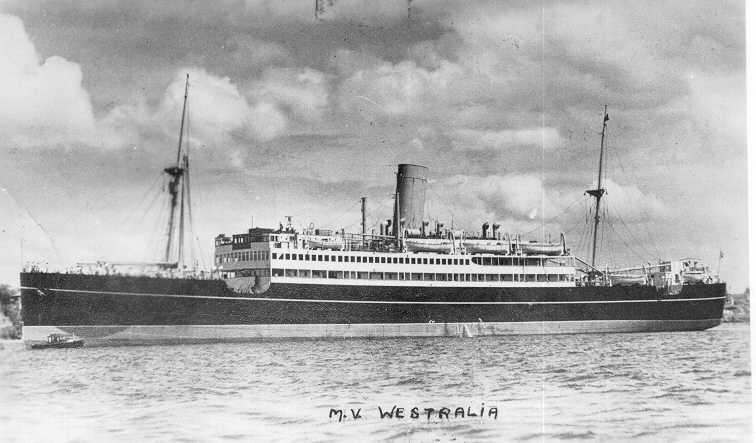 I know I sailed on the ship

Lance Anderson (not verified) on Mon, 2017-05-22 19:29
I know I sailed on the ship Westralia 2 times as a lad between Melbourne and Perth and had the greatest time of my life, I would have been 7 to 9 years of age, the time of travel between 1955 and end 1957. I was hoping that I could get some verification of my exact time of travel. I know I was in 2nd class and still remember a lounge area our bar with bench seat around the walls, under which I would crawl and to my mind become very rich with all the silver coins I found! I also remember going down the 2 level hold and seeing horses and things, I think I explored every inch of that ship, O what an adventure I had on those two trips, I have lived those journeys over and over!

I know I sailed on the ship

Lance Anderson (not verified) on Mon, 2017-05-22 19:34
I know I sailed on the ship Westralia 2 times as a lad between Melbourne and Perth and had the greatest time of my life, I would have been 7 to 9 years of age, the time of travel between 1955 and end 1957. I was hoping that I could get some verification of my exact time of travel. I know I was in 2nd class and still remember a lounge area our bar with bench seat around the walls, under which I would crawl and to my mind become very rich with all the silver coins I found! I also remember going down the 2 level hold and seeing horses and things, I think I explored every inch of that ship, O what an adventure I had on those two trips, I have lived those journeys over and over!

Naida Farmer (not verified) on Tue, 2019-04-16 15:59
I was about 13 or 14, it would have been end of year summer school holiday time in Melbourne in the year 1952 or 1953, when I travelled between Melbourne and Fremantle with my Mother, Father, twin sister and another sister some 7 years older. From memory the trip took about a week. My parents and my two sisters had a marvelous time, particularly my elder sister who I recall flirted unashamedly with a couple of the crew members. On the other hand I'll never forget that time as being the most horrible week of my life. The cabins were beautiful, the dining room was lovely, the captain was nice. I'll never forget on the first day out of port they showed the film "The Cruel Sea", which was to prove to be an omen for me. For the entire journey I suffered the most debliitating bout of sea sickness you could ever imagine, the sea was really rough across the great Australian bight and I spent almost the entire trip sitting out on deck. I remember my mother coming back from the dining room and telling me they had to wet all of the table cloths so as the cutlery and crockery wouldn't slip off the table because the ship was pitching about so much. While I was on deck the only food I could eat were dry biscuits and apples. I remember the ships doctor coming to see me one day, and telling me he'd heard of people going green when they were sea sick, but in all his years of sea travel, he had never actually seen one until he saw me. I'm now 80, and despite hearing about sea travel being so much smoother now than it was back then due to stabilizers and what have you, I've never been tempted to go cruising as so many of my contemporaries choose to do. The most adventurous I've ever been is the Ferry trip across Port Phillip Bay from Queensciff to Sorrento. I look back on my time during that trip with mixed feelings, it probably spoiled me for ever about sea travel, all I did the entire time was pray for it to end.

We sailed from Sydney

Jack Williams jnr (not verified) on Sat, 2019-11-02 19:20
We sailed from Sydney (Darling Harbour?) to Melbourne christmas holidays 1956. I was only 6yrs old and still remember aspects of the trip. The cabin steward helped us with our luggage into the cabin and while my parents backs were turned,helped himself to my mothers purse off the bunk,as he departed.Needless to say when the incident was reported to the Purser the word of a 6yr old did not hold much weight. The purse contained holiday money and the keys to the house were we were to stay in Melbourne. The journey was fairly uneventful apart from a quick exit one morning after turning shades of green.I must admit Idid enjoy entering Port Philip bay once the ships deck stopped bouncing up and down.

Allan Simpson (not verified) on Sun, 2021-02-07 10:28
I think it was probably 1952, the year in which I turned 13, that my parents took me on an exciting round trip voyage on board the TSMV 'Westralia', from Sydney to Fremantle, via Melbourne and Adelaide. The beginning of the trip was rather uneventful, however sailing out of Port Phillip Bay on the outbound journey and passing through the entrance to the Bay in an area known as 'The Rip', I clearly remember being seated with my parents in the ship's dining room, beginning our evening meal. The portholes, not all that far above the waterline, were all open as the ship was non-airconditioned and it had been a very warm day. Suddenly, and without warning, a wave hit the side of the ship and people can guess the rest of the story! A huge amount of sea water gushed into the dining room , saturating everyone and every thing in its path! The resultant mess was quite unbelievable in the strictest sense of the word! After it had been cleaned up to the best of their ability, the dining room stewards then attached 'fiddles' to the edges of each table, to prevent items from sliding off in the swell. However, not many passengers ventured back to continue eating as the ship ploughed on towards Adelaide. But wait ... there's more! Later on in the voyage, in the middle of the night whilst somewhere in the middle of the Great Australian Bight between Adelaide and Fremantle, one of the passengers suffered an attack of acute appendicitis, necessitating immediate surgery. Most people, including myself, were sound asleep whilst this drama unfolded, but we were later told the following story. We were in mountainous seas and many passengers were suffering from seasickness (I know I was!) It was deemed necessary to shut down the ship's engines to prevent violent vibrations from the propellor shafts whilst the operation took place. But apparantly when they found the ship's surgeon, he was deemed to have been too intoxicated to perform the urgent operation. Very fortunately, there were a couple of other doctors among the passengers and it was actually them who were summoned to carry out the operation. We were also told that they had to get a couple of forks from the galley which, after being sterilized, were used as retractors. I have never been as seasick as what I was on that voyage. I could only tolerate very small quantities of hot Bonox and dry biscuits! I remember sitting out on the deck and seeing a wall of water coming towards us, wondering if this would be 'it' ... that the ship would capsize and we'd all be drowned. But, fortunately it weathered the huge seas and eventually we reached Fremantle. I can still clearly remember looking over the railing of one of the decks and seeing a black and white St John Ambulance waiting beside the ship on the wharf below for the appendicitis patient, who was carried down the gangplank and quickly whisked away. I believe the 'Westralia' being caught in those mountainous seas in the Bight was newsworthy enough to be written up in the local Perth newspapers. I'm pleased to be able to say that the return voyage to Sydney a few days later was, very thankfully, quite smooth and completely incident-free!

Capt.Christophe... (not verified) on Wed, 2021-04-07 15:46
In late 1948 I Boarded Westralia with my mother in Auckland bound for Sydney. My father had flown over some 6 weeks earlier. We had left England in '47 and spent 3 months in California then 12 months in NZ. This being my third deepsea voyage I was most excited. Now 8 years old I had decided that I wanted to go to sea after my first trip on the transAtlantic Liner Mauritania. That was followed by a Pacific crossing from San Francisco to Auckland on the half converted troop ship Marine Phenonix, operated by Matson Line. I can remember that as an 8 year old I thought the public rooms were well appointed. The weather was very good for a Trans Tasman crossing and a lot of time was spent on the boat deck and on No 3 hatch which was up behind the bridge. Even at that age I had an appreciation that she was a "good sea Ship' as we had the normal quartering seaand she had a very pleasant rolling motion. Yes I did go to sea at 17 as a cadet, 9years from 3rd officer to Chief officer the 15 years as Captain, then 25 years as a Port Phillip Pilot. In the history above it is nor mentioned about her NZ -Sydney voyage, so I suspect it was a one off charter by maybe the NZ government???? I live on the GOLD COAST not far from the sea, I get nervous if I can see it or hear the sea!!!

Further to my note above it

Capt Chris Coy (not verified) on Wed, 2021-04-07 15:58
Further to my note above it should be noted that when I lived at Soldiers Point at Port Stephens NSW I was amazed to find out the the Westralia had been anchored in Salamander Bay and used as a training ship for American troops who were stationed in Port Stephens. They ere training to board the landing craft from the large ship carrying them to the battle area.

Cost Of Propecia At Walmart

Where Can I Buy Alli Diet

Getting Viagra Over The