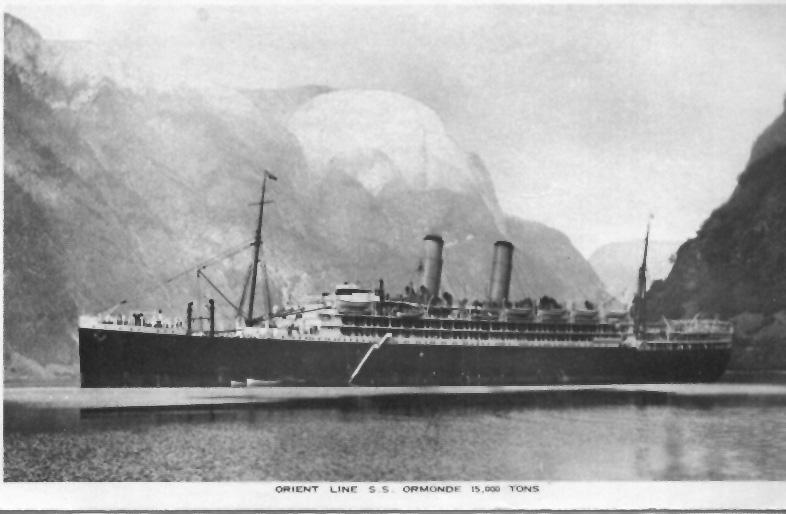 A copy of the history of the

Mark Cockle (not verified) on Fri, 2017-09-15 18:48
A copy of the history of the ship S.S. Ormonde, presumably picked up on the vessel. This ship carried my grandfather back to the UK after his duty in Burma after WWII

love a pdf of the history of

My grandfather served in the

mike (not verified) on Thu, 2018-06-07 15:16
My grandfather served in the east lancashire regiment and travelled on the Ormonde back to Plymouth in 1936 and trying to find out more about his military service and where he would have served if anyone has any info about where the troops on the Ormonde would have been serving in the late 1930's I would be most grateful. Thank You Mike

I came to Australia on the

I also came to Australia on

Alessandra Nicoletti (not verified) on Sat, 2018-09-29 20:22
My grandfather Ermanno Nicoletti was a prisoner of war in Australia (NSW), he was repatriated on 31-Dec-46 and went back to Italy on board of the Ormonde. I'd like to have more information on this, details of the trip, dates, places, number of passengers, etc. Thanks in advance! :)

I BELIEVE MY GRANDPARENTS

vicki jane batten (not verified) on Fri, 2019-06-14 14:23
I BELIEVE MY GRANDPARENTS ARRIVED IN SOUTH ISLAND OF NEW ZEALAND IN 1921 ON THE SS ORMONDE JOHN AND ADA BURRIDGE BUT I CANT FIND ANY RECORD OF THEM

My grandfather traveled on

Toni (not verified) on Sun, 2019-08-18 07:53
My grandfather traveled on the SS Ormond when it was a troop carrier. I have two sterling silver candlestick holders that he "souvenired".

I travelled from England with

Jim czerwinski (not verified) on Wed, 2019-10-16 17:45
I travelled from England with my mother on the ships last voyage to Australia in 1951 or 1952 from memory. My Father had travelled ahead and met us in Sydney when we disembarked. I was 6 years old. Im now 74 yet still have vivid memories of the Ormode and never forgot her name.

I believe my mother (who died

I know a lady who came from

Irene McCallum (not verified) on Wed, 2019-10-30 18:36
I know a lady who came from India on SS Ormond in 1947 after Partition and I am sure she would be happy to talk to you. However, I am on holiday in France at the moment and will be back in Scotland until 7th November and will speak to her then - she doesn’t have email.

My sister sailed for

Britt Reyment (not verified) on Sun, 2020-01-26 22:46
My sister sailed for Australia on the Ormonde as an five year old in July 1951. She traveled from London with a young couple (not our parents) to Fremantle WA. I never heard the names of the young couple that took care of her. My sister passed away some years ago.

Martin Gibbs (not verified) on Mon, 2020-03-02 07:09
My father, Charles Henry Gibbs, from Grays, Essex was, he told me, head barkeeper on the Ormonde when it was a cruise ship prior to the second world war. He mentioned that Betty Driver, later to be Betty Turpin in Coronation Street, sang in the band during some of the cruises. He also served on the ship during the war and he would point the ship out to me when it appeared in the Atlantic convoys on the TV programme, The World at War during the 1960s He was born in 1902 and died in the late 1980s.

My Grandfather travelled back

The Ormonde is subject of a

David Morgan (not verified) on Mon, 2020-05-04 10:00
The Ormonde is subject of a 1938 picture 'Last Goodbyes' by Max Dupain, showing people waving as it leaves Woolloomooloo Passenger Terminal in Sydney, with streamers trailing behind it. https://www.maxdupain.com.au/product/sunrise-sydney-harbour/

Alan Goodman (not verified) on Fri, 2020-07-24 00:23
My parents and I (about 10 years old then) left Southampton, England to Brisbane, Australia on an Assisted Passage Scheme for British immigrants going to Australia. I think it was around 1948? I played the violin well enough as a child to play classical music and actually had a small piece written about me in the Brisbane Newspaper when we arrived there showing me with my violin. Both my parents are deceased and I am now 83 years old as I write this. I am curious if that newspaper article was even archived digitally?

Mattias (not verified) on Sat, 2021-01-23 05:29
Hello I live in sweden and i have a powderbox or something from SS Ormonde. Manufacturer Mappin & Webb. Some collector interested of this object?

I travelled on the SS Ormond

Arch Caithness (not verified) on Tue, 2021-02-02 21:00
I travelled on the SS Ormond at the age of 4 with my family and arrived in Brisbane on the 23 May 1949. I boxed on board and only lost one fight. Whilst in Sydney I was spotted by a Sydney photographer who took my photo in my kilt. I still have the photo today.

Roderick Stewart (not verified) on Fri, 2021-02-05 04:35
In 1939 my mother, Elaine Howells (working for Sir K. Murdoch), made a disparaging mention in her journal (while on her way to London via the Italian ship Romolo later sunk by the Aussie navy). "The Purser took me on a tour of the ship this morning and showed me the huge dormitories, each accommodating more than 100, being prepared for the workmen being taken aboard at Massaua. The third class cabins are really quite good and compare more than favorably with the bowels of the Ormonde. The dining room is certainly better." I had trouble finding this ship listed as a troop ship, maybe because she was "unnamed" as a result of her being rushed into service partly unfinished, to get troops to Egypt from Australia in 1917. I am puzzled by her mention of this ship, because other evidence in her journal makes me believe that she had little or no knowledge of her father's (EJ Howells MC) WWI exploits - where he had been and what he had done. Embarkation list and his records show that EJ Howells did not sail aboard RMS Ormonde - so why would his daughter make such a comment in 1939? Question: Was this ship's name a common Australian term for sparse accommodations based on tales from returning AIF stories?

I believe my grandfather

I believe my grandfather

Peter Meredith (not verified) on Sun, 2021-07-18 05:54
My father, Thomas John Meredith, was repatriated to the UK on the SS Ormonde after three and a half years as a prisoner of war with the Japanese. After the hell he went through the voyage felt like being in the lap of luxury he told me. The ship left Rangoon on september 26th 1945, calling at Colombo on 2nd october, Suez on 12th october and docked at Southampton on 22nd october. My dad always kept a postcard of the SS Ormonde, the ship that carried him to freedom.

Hi all, my name is Joe

Joseph Murrins (not verified) on Thu, 2021-08-19 13:16
Hi all, my name is Joe Murrins. I am writing a story about my trip to Australia in 1952 on the Ormonde. I was an orphan in Bala Nazareth House and was transferred to Nazareth House in Swansea. I was 5 years old when I was herded like cattle along with other children when I boarded the Ormonde in Cardiff Wales as a child migrant/orphan. I was sent to Australia under the guise of a better life which was never my experience. All I got was pain and suffering in the 2 orphanages Castledare and Bindoon Boystown. I along with many others suffered horrific abuse at the hands of the Christian Brothers. I am a man of 75 years of age and am still suffering to this very day. I know there are many more like me who endured the suffering, pain and mental anguish due to horrific abuses and I hope it never happens again. The irony and hypocrisy of the filthy, disgusting, evil predatory perpetrators who committed these heinous crimes on the most vulnerable children in the name of the Lord and got away with it. 'Suffer the little children who come unto me" Was bloody well right!